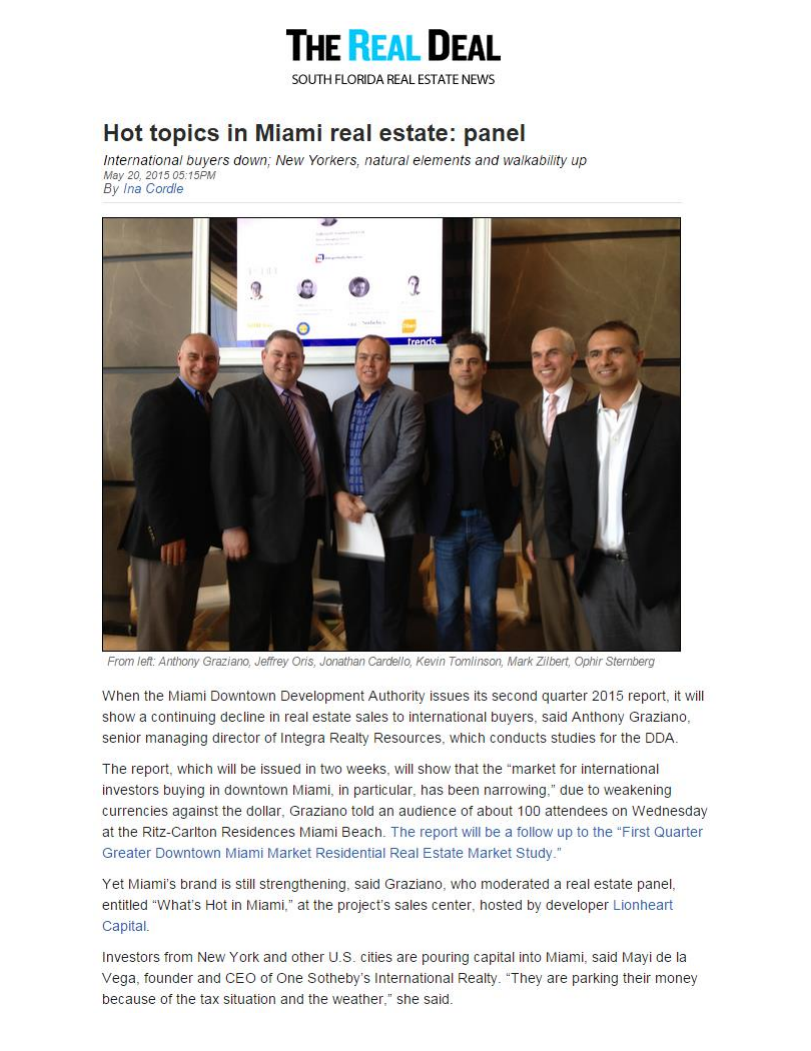 When the Miami Downtown Development Authority issues its second quarter 2015 report, it will show a continuing decline in real estate sales to international buyers, said Anthony Graziano, senior managing director of Integra Realty Resources, which conducts studies for the DDA.

The report, which will be issued in two weeks, will show that the “market for international investors buying in downtown Miami, in particular, has been narrowing,” due to weakening currencies against the dollar, Graziano told an audience of about 100 attendees on Wednesday at the Ritz-Carlton Residences Miami Beach. The report will be a follow up to the “First Quarter Greater Downtown Miami Market Residential Real Estate Market Study.”

Investors from New York and other U.S. cities are pouring capital into Miami, said Mayi de la Vega, founder and CEO of One Sotheby’s International Realty. “They are parking their money because of the tax situation and the weather,” she said.

Panelist Mark Zilbert, president and CEO of Zilbert International Realty, agreed. “The trend increasingly is buyers from the Northeast rediscovering South Florida and rediscovering Miami,” he said. “New York buyers are here in huge, huge numbers with record-breaking deals to American buyers that we didn’t have years ago.”

In general, buyers are looking for high-end finishes, stone and other natural elements to be incorporated in construction, said Zilbert, who was joined on the panel by Jonathan Cardello, senior principal of ADD Inc., Jeffrey Oris, economic development director of the city of Miami Beach, and Kevin Tomlinson, senior vice president of One Sotheby’s International Realty. Ophir Sternberg, founding partner and CEO of Lionheart Capital, said the firm’s first panel was aimed at bringing agents into the project’s sales center and keeping them informed about the market.

For Tomlinson, the No. 1 amenity buyers want is walkability. “They don’t want to get into a car,” he said. “That’s why Miami Beach, in particular, is so attractive.”

Other services are also key, like “the ability to have coffee delivered to your bedroom in the morning,” Cardello said.

Yet public transit is essential for the market to thrive, he said. “We have to face the fact that we need public transportation,” Cardello said, “and that investment will allow the city to grow.”

Sea level rise is another concern, and infrastructure is needed in Miami Beach to combat rising tides. Oris said efforts are underway to deal with the issue.

“We’re not going to let a trillion dollars of real estate sink into the water,” Graziano said.