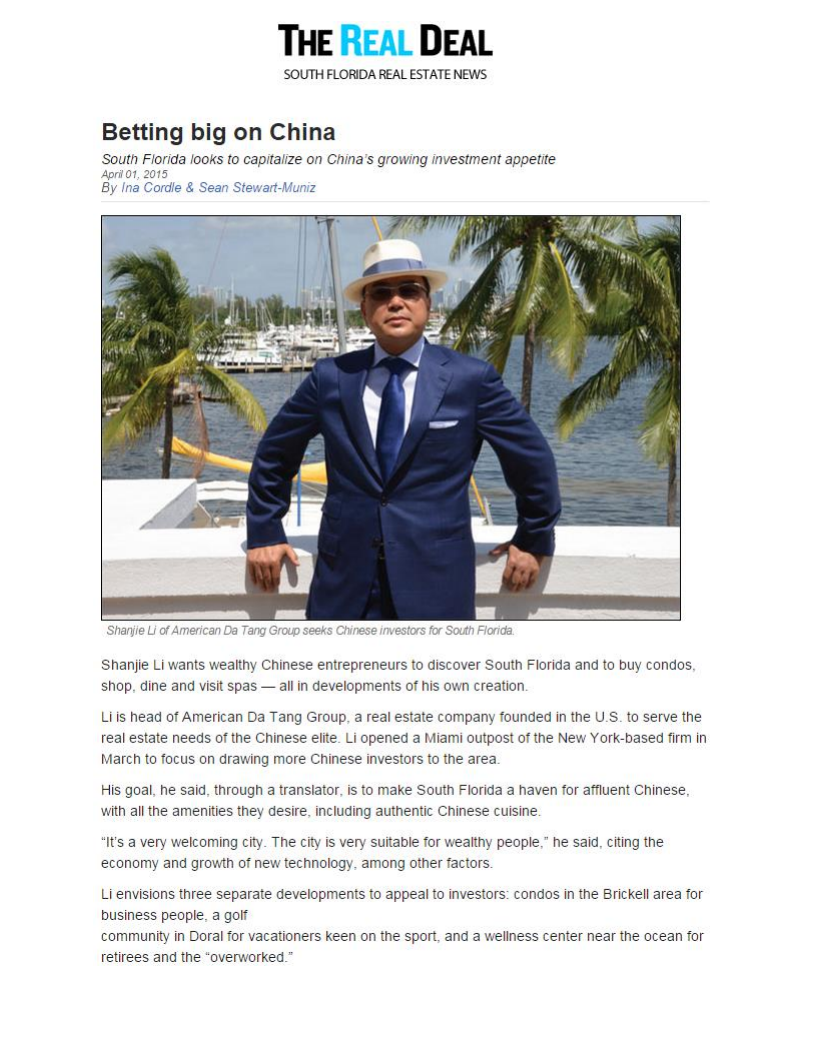 Shanjie Li wants wealthy Chinese entrepreneurs to discover South Florida and to buy condos, shop, dine and visit spas — all in developments of his own creation.
Li is head of American Da Tang Group, a real estate company founded in the U.S. to serve the real estate needs of the Chinese elite. Li opened a Miami outpost of the New York-based firm in March to focus on drawing more Chinese investors to the area.

His goal, he said, through a translator, is to make South Florida a haven for affluent Chinese, with all the amenities they desire, including authentic Chinese cuisine.

“It’s a very welcoming city. The city is very suitable for wealthy people,” he said, citing the economy and growth of new technology, among other factors.

Li envisions three separate developments to appeal to investors: condos in the Brickell area for business people, a golf community in Doral for vacationers keen on the sport, and a wellness center near the ocean for retirees and the “overworked.”

So far, an affiliate of the American Da Tang Group has purchased a Brickell development site at 1430 South Miami Avenue for $74.8 million. American Da Tang will develop it, though no specific plans have been finalized to date.

Li’s next step is to open a high-end Chinese restaurant in mid-May at 801 Brickell Bay Drive, in the Four Ambassadors building. Called Da Tang Unique, the restaurant will have 4,500 square feet. A chef brought in from China will oversee it, he said.

Li is not the only one in South Florida focusing on Chinese investors. Other developers and real estate professionals are targeting the country for potential buyers as news spreads of the increasing appetite Chinese nationals have for U.S. real estate investment. In Florida, China’s share of the foreign buying pool jumped more than 40 per-cent from mid-2013 to 2014.

A report released recently by Miami’s Downtown Development Authority outlined the potential for more Chinese buyers in the local condo market, citing the Chinese yuan’s gains against the dollar — one of the few currencies to show that trend — as one of the factors.

“What we are seeing is really the beginning of a strong Chinese influence and interest in South Florida,” said Philip Spiegelman, principal of International Sales Group, which has recently formed a partnership with American Da Tang Group for the marketing of new developments. ISG also added a Mandarin-speaking member to its staff to be able to communicate with Chinese buyers and form alliances.

The Trump Group (no relation to Donald Trump) has produced Chinese translations of all of the marketing materials for its luxury development, The Estates at Acqualina. The developers also say they named its two towers Via Acqualina 777 and Via Acqualina 888 because the numerals are considered lucky in Chinese culture.

“There is a growing appetite and a growing trend,” he said.